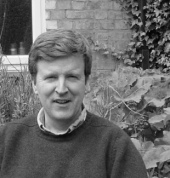 Charles Cockell is Professor of Geomicrobiology at the Open University. He received his first degree in Biochemistry from Bristol University and his doctorate in Molecular Biology from Oxford University. He was a National Academy of Sciences Associate at the NASA Ames Research Center, California for two years and spent two years as a Visiting Scientist at Stanford University and the University of Arizona and worked for four years at the British Antarctic Survey. His scientific interests involve studies of microbe-mineral interactions and the microbiology of extreme environments. He has been on scientific expeditions with NASA, the US Fish and Wildlife Service and the US Antarctic Program. He led the first western expedition to visit post-communist Mongolia in 1990, an expedition that covered 2,500 km of Mongolia and an expedition to Indonesia to pilot an insect-collecting ultralight above the rainforest canopy in 1993. He has also carried out extensive work in the High Arctic. He is an alumnus of the International Space University (1991). He is author of the popular science book, ‘Impossible Extinction’ (CUP), describing the survival of the microbial world after natural catastrophes and ‘Space on Earth: Saving Our World by Seeking Others’ (McMillan), which explorers the links between space exploration and environmentalism.