The Association of Mars Explorers 2004 dinner was held at the luxurious Fairmont Hotel in San Jose, California on March 30, 2004. Twenty-five of the associations members attended the event.

The 2004 dinner was the first official dinner of the association following its founding in 2002.

The successful evening featured a talk by Penny Boston on ‘Exploring Martian Caves’. She captivated the audience with incredible insights into the diversity of caves on Earth and the biota they contain. She talked about how caves will one day be used on Mars as possible sources of materials and to escape the harsh radiation environment on the surface. 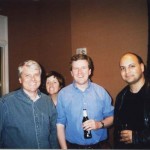 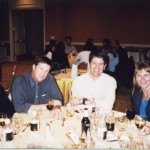 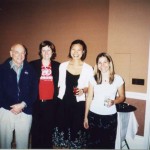 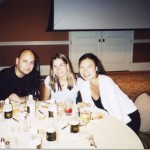 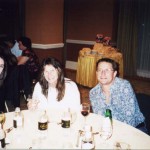 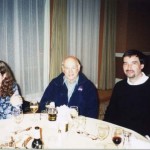 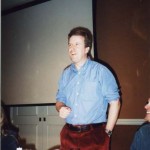 The Association of Mars Explorers held its first biennial dinner since its founding in 2002. Gathering in the luxurious Fairmont hotel in San Jose, California, the historic meeting was attended by notable veterans of human Mars exploration Carol Stoker and Penny Boston and it was honored by the presence of one its founding members, Nobel Laureate Baruch Blumberg.

The successful evening featured a talk by Penny Boston on ‘Exploring Martian Caves’. She captivated the audience with incredible insights into the diversity of caves on Earth and the life they contain and she explained how caves will one day be used on Mars as possible sources of materials and to escape the harsh radiation environment on the surface of the planet.

The non-profit, independent club, which requires that members have ‘led or taken part in scientific exploration on Mars or in Mars analog environments’ now has seventy members worldwide and is growing. Twenty-five of the members gathered at the dinner in San Jose, which was preceded by the Association’s first Board meeting since founding.

The President of the Association for 2002-2004, Charles Cockell, Ph.D. said, ‘The 2004 dinner was really historic as the first official gathering of the Association. A new sense of community was created amongst its members who believe in the human exploration of Mars. It was a really fun evening with a real sense of camaraderie – kindred spirits with a common purpose’. Cockell, who has worked in the Antarctic and arctic, was the first to publish proposed routes for expeditions across the Martian polar ice caps and has a life long interest in human Mars exploration.

The Association of Mars Explorers, created in April 2002 as ‘The Mars Club’, an informal name it still holds, dedicates itself to acting as a forum for future explorers of the Martian frontiers, including the deserts, mountains and poles. As no humans have yet been to Mars its membership is currently exclusively composed of expeditioners and explorers who study Mars-like environments on Earth in preparation for these great adventures. The association, which accepts international membership, holds a biennial dinner and is planning a number of other programs. The Association is run by a President who holds office for two years.

During the 2004 dinner, the Presidency was handed over from Charles Cockell to University of Florida scientist, Andrew Schuerger, Ph.D. with the ceremonial signing of the Presidential flag. Schuerger, who has worked extensively on life support systems for space exploration, including Mars, will hold office until the next dinner in 2006.

Other highlights of the dinner included: William Hartmann became the Association’s first Honorary Life Member. As an explorer, Hartmann was recently the author of ‘A Travelers Guide to Mars’, a book that brings together many of the different environmental conditions on Mars and considers them from a human exploration viewpoint. As a scientist, Hartmann has a life long research career studying the geology of other worlds and particularly Mars. As an artist, Hartmann has brought the excitement of solar system exploration to many in his diverse paintings. The dinner also saw the unveiling of the Associations’ new flag – bearing the characteristic red planet and blue sights, a reference to the Association’s acronym, ‘AME’. Already on its way to Mars analog environments around the Earth, the flag is the rallying point of the prestigious Association.

The next dinner of the Association will be held in 2006.